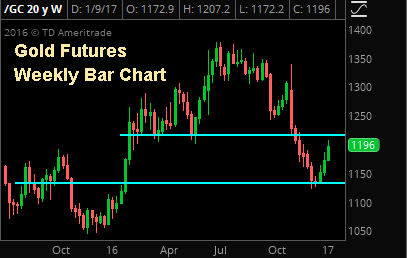 Turning to gold, we saw an unwind in the Trump Trade that has dominated the markets since the election yesterday morning. Reason being, the markets did not gain the clarity they were hoping to from Trump’s press conference Wednesday, so basically investors were left disappointed.

Stocks pulled back, the dollar declined and bonds rallied, all of which supported the early gains in gold. Looking ahead, if the dollar continues to grind lower and the bond bounce continues, gold will be able to extend recent gains. But until futures can establish themselves above the $1235 congestion area, this still needs to be considered a rebound in an otherwise downward trending market.

It is clear that the precious metals market, specifically gold, has gotten crushed since the election, and there are a lot of investors wondering if now is the time to buy.

The simple answer is, “Not yet.”

First, a lot of this reversal was thanks to the unexpected election outcome that initiated the rally in the dollar to multi-year highs. When the dollar rallies hard, gold will fall every time. Going forward, the dollar rally will need to level off in order for the gold market to materially stabilize. The Sevens Report long-term upside target for the Dollar Index is between 106 and 107, so until The Sevens Report see those levels (or signs of a significant reversal in the greenback confirmed by some sort of fundamental altering event) the outlook for gold is not very bright… until The Sevens Report sees an acceleration in inflation.

Aside from the dollar, the real interest rate (nominal interest rates minus the inflation rate) has offered the best fundamental read for the gold market.

In the wake of the election, inflation expectations did not materially change; however, nominal interest rates surged in a big way. That resulted in a spike in real interest rates, and that’s very bearish for gold.

When inflation accelerates, and starts to outpace rising interest rates again, The Sevens Report will see gold as an attractive investment like it did earlier this year.

To be clear, gold and the dollar can rally together, just not while the dollar is moving as swiftly as it did post-election. If inflation shows signs of getting out of hand, and the Fed is perceived to be “behind the curve,” then gold can rally (because real interest rates will decline as inflation accelerates despite a rally in the buck).

Technically speaking, the trend is lower in gold, and there is not much support before the $1130-$1140 area. To the upside, retracements to resistance at either $1210 or $1225 should be normal throwbacks in an otherwise downward trending market.

Bottom line, gold is not a buy now. But as market conditions settle, The Sevens Report will look for the two key components necessary for a new rally in gold… the dollar leveling off and real inflation rates showing signs of declining as actual inflation edges higher. 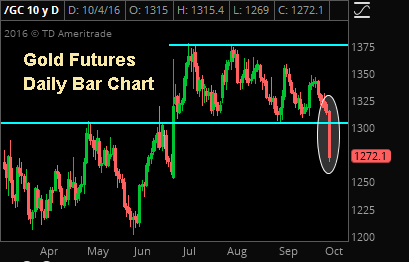 Gold plunged to a 3 month low yesterday amid a hawkish shift in Fed policy expectations this week. Despite the near term breakdown however, the long term trend is still bullish.