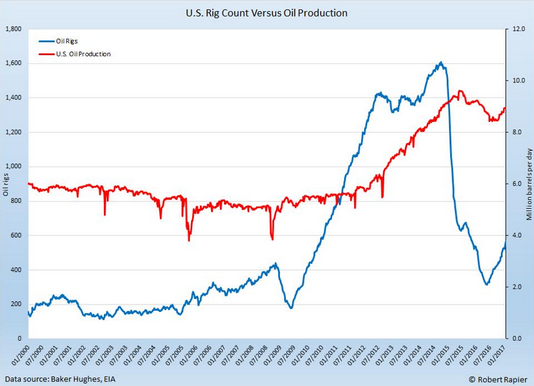 The Oil Market: Now and Then

We have included in today’s report a chart that was featured in a Forbes article yesterday regarding the two main influences on the oil market right now: rising US output and OPEC/NOPEC production cuts. At first look, the chart suggests that using hindsight as a gauge, US production lags the rise in rig counts which supports the argument that US production will not rise fast enough to offset the OPEC/NOPEC efforts. But we think that argument is flawed and here is why.

During the last aggressive expansionary phase for US oil production (rising US rig counts/increasing output) which lasted from 2009 to 2014, oil prices were wavering between about $80 and $110/bbl. The correlation between the pace of rig count growth and production growth was rather low as you can see by the difference between the slopes of the two lines in the chart. The likely and simple reason for that low correlation is the fact that there was a lot wild cat drilling, thanks to a surge in industry investment, that turned out to be unsuccessful.

In today’s lower price environment, efficiency is key and exploratory drilling, especially in unconventional areas, is at a minimum while producers focus their time, efforts, and investments on reliable sources of oil with considerably lower lift costs. If this is indeed the case as we believe it is and a good portion of the increasing rig counts that are being reported by BHI are actually DUCs (Drilled but Uncompleted wells) in proven areas, then the relationship between rig counts and production should have a tighter correlation than it did 5-10 years ago.

Bottom line, the fundamental backdrop of the energy market is different right now than it was between 2009 and 2014 and because investment in energy is much lower while the industry remains focused on efficiency, we are more likely to see a tighter correlation between rising rig counts and rising US production which would result in a faster pace of production growth. That in turn would offset the efforts of global producers who are trying to support prices and as a result, leave us in a “lower for longer” oil environment.

How Does Trump’s Approval Rating Impact The Stock Market? March 8, 2017