Futures are moderately higher following a quiet weekend and ahead of two important events this week:  Phase one signing ceremony (Wed) and the start of earnings season.  Futures are essentially recouping Friday’s losses.

U.S./China trade optimism is helping stocks rally as the U.S. and China will resume semi-annual meetings, something that was done in the Bush/Obama administrations.   This doesn’t impact trade directly, but just like in 2019, any generically positive U.S./China headline will result in at least a mild rally.

Today there are no notable economic reports and just two Fed speakers, Rosengren (10:00 a.m. ET) and Bostic (12:40 a.m. ET), and they won’t move markets.  So, investors will be looking for any hints as to what will be released at the U.S./China phase one signing ceremony on Wednesday, and the more specifics, the better.

Futures are moderately lower on rising general concerns about the geo-political fallout from the Soleimani killing.

Geo-political headlines over the weekend were incrementally negative, but none of them were specific or material enough to imply a material drop in stocks is more likely, and the dip in futures is driven by just general concerns (more on that inside the Report).

Today geo-political headlines will continue to dominate trading, and any implication of further deterioration in the U.S./Iran situation will weigh on futures.  Economically, the  key number to watch it the December Markit Services PMI (E: 52.2) and, as remains the case, the stronger the number, the better.

Futures are slightly higher thanks mostly to momentum from last week’s rally as the weekend was a quiet one.

On trade, the WSJ reported China has reduced additional tariffs on some goods, but this is all part of the existing phase one deal and it’s not an incremental positive.

Economic data was sparse overnight, and none of the numbers are moving markets.

Today we get the most important economic report of the week, New Orders for Non-Defense Capital Goods ex-Aircraft (E: 0.0%), which is a proxy for business spending – something that should start to rise now that we have a phase one trade deal.  As has been the case, the stronger this number, the better for stocks.

Beyond today, this week would have been a quiet one even if there wasn’t a holiday, but it should be even more so as the economic calendar is very sparse.  Geo-politically, North Korea could launch a missile or test a nuclear bomb this week, but while it might cause temporary volatility, that won’t derail this rally.  So, as long as there are no negative trade surprises, the path of least resistance for stocks remains higher into year-end.

On U.S./China trade, there was no new news, although China released a statement saying it wanted to make a deal “as soon as possible.”

Today there are no notable economic reports and no Fed speakers (they are in their blackout period ahead of Wednesday’s decision) so focus will again be on any updates on U.S./China trade.

The December 15th tariff increases are the last “big” event of 2019 and markets fully expect those to be delayed, so any confirmation of that should be a mild tailwind on stocks.  Conversely, any hints the tariffs might go into effect will hit markets, potentially hard.

More broadly, there is some disappointment with Friday’s announcement as it does not provide material tariff relief or trade clarity (more on that in the issue).

Today is the Columbus Day holiday so there are no economic reports or Fed speakers while banks and the bond markets are closed.  Given that, we can expect any U.S./China trade related headlines to again drive markets until the focus shifts to earnings tomorrow.

A Bloomberg article Sunday afternoon was a mild negative as it lowered expectations for a broad trade deal at this week’s talks, but there was no new news revealed.  To that point, we need to all brace for an avalanche of U.S./China trade headlines as we approach the Thursday start of senior-level talks, but cutting past the noise, the expectation is for a “Trade Truce” so anything that contradicts that expectation will be a negative for markets.

Today there is no notable economic data and two Fed speakers: Kashkari (10:20 a.m. ET) and Powell (1:00 p.m. ET).  Powell is clearly the more important of the two, but he’s giving opening remarks at a movie screening about the Fed (seriously) so I don’t think he’ll say anything market moving.

But, the reports aren’t moving markets as focus is on central banks this week (specifically the ECB on Thursday).

Today there are no notable economic reports nor are there any Fed speakers (they are entering the “blackout” period ahead of next Wednesday’s meeting) so we’ll be watching for any trade related headlines, and any continued improvement in the “tone” of relations will continue to support stocks.

Futures are surging after Trump and Xi did what was widely expected at the G20 and reached a trade “truce.”  On balance, the meeting was a mild positive, but not to the extent futures are implying this morning (more on that inside the Report).

Economic data, meanwhile, was universally disappointing overnight.    Every manufacturing PMI missed expectations this morning including those from China, Germany, the EU and Great Britain.  All of those PMIs are now below 50, signaling widespread contraction in manufacturing activity.

OPEC, meanwhile, extended current production caps for six to nine months at their meeting this week, longer than was expected, and oil is rallying 2% as a result.

Today will be spent digesting the G20 “truce” and seeing if markets can hold these early gains once more details emerge.  On the economic front, the key number today is the ISM Manufacturing PMI (E: 51.2) and it needs to be “Goldilocks” to support this rally. 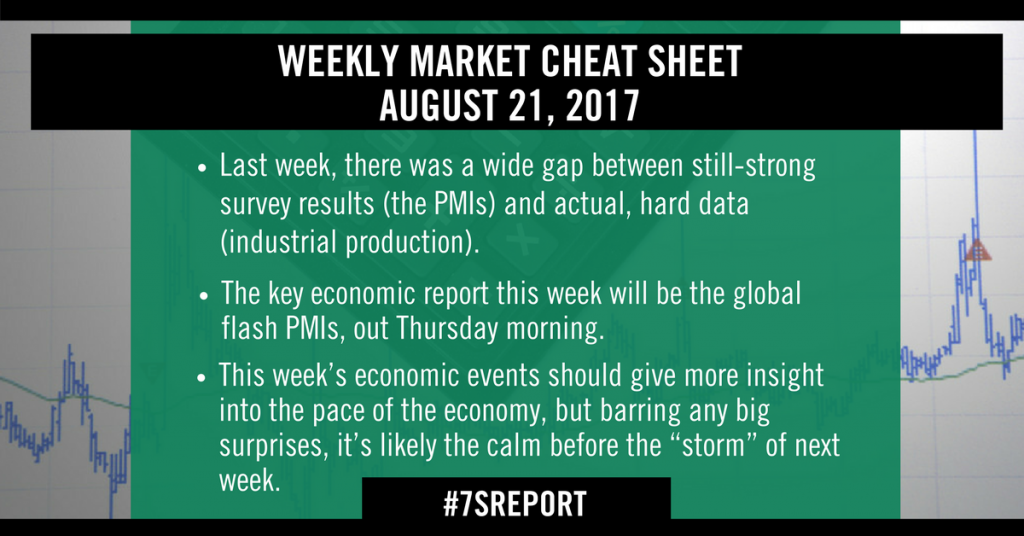 There were some puts and takes from the economic data last week, but in aggregate it didn’t change the outlook for the US economy (still slow but steady growth) or the Fed (balance sheet reduction in September, a rate hike in December dependent on inflation).

I say puts and takes, because there were some decent economic reports last week, starting with a strong Retail Sales report. July retail sales beat estimates on both the headline (up 0.6% vs. 0.3%) and in the more important “Control Group” (retail sales ex-autos, gas and building materials), which rose 0.6% vs. (E) 0.4%, and saw a positive revision to June data.

That was a legitimate uptick in activity and an economic positive, although it remains to be seen whether that strength in consumer spending can be sustained past back-to-school and summer-vacation season.

The other highlights from last week were the August manufacturing surveys. August Empire Manufacturing surged to 25.2 vs. (E) 9.8 while Philly Fed Manufacturing also beat estimates at 18.9 vs. (E) 17.0. To boot, New Orders were strong in both reports (20.6 for Empire and 20.4 in Philly).

According to that type of data, we should see a big uptick in manufacturing activity in August, although I’ll again caution that these are surveys. And, unfortunately, with the exception of retail sales, the other “hard” economic data didn’t match these very strong survey results.

Specifically, July Industrial Production missed estimates, rising 0.2% vs. (E) 0.3%. But, more disconcertingly, the manufacturing subcomponent dropped -0.1% vs. (E) 0.2%. A lot of that decline was auto related, so it’s not quite as bad as it appears.

But, the overarching takeaway from last week’s data is that a wide gap remains between still-strong survey results (the PMIs) and actual, hard data (industrial production). We need that hard data to get consistently better if we have any hope of a rising economic tide carrying stocks higher for the rest of the year.

Turning to the Fed, the July meeting minutes were released last week, and while the market traded as though the minutes were slightly “dovish,” the reality is that they were neither hawkish nor dovish. The minutes confirmed that the Fed will reduce the balance sheet in September, although a rate hike in December seems very much 50/50.

Bottom line, it wasn’t a bad week for economic data, but we need evidence of economic acceleration to help push stocks higher, and that continues to be elusive.

In aggregate, this is a quiet week for economic data (next week is the important week, as we get final global PMIs and the August jobs report), but there are still some potentially market-moving events to watch.

First, the Jackson Hole Policy Conference (i.e. conference/summer vacation) starts Thursday and runsthrough the weekend. The big names will be there: Draghi, Yellen, Carney, Fischer… but don’t expect anything that will move markets. It’s been made clear that Draghi doesn’t want to drop any hints about tapering until the ECB meeting in September (basically three weeks away). With the Fed, we know what to expect…balance sheet reduction in September.

Looking past central bankers, the key economic report this week will be the global flash PMIs, out Thursday morning. Again, we’re looking for the national PMI to match the strength we saw in Empire and Philly last week. If it does, that will be taken as an anecdotal positive. Internationally, there shouldn’t be any big surprises in this number.

Beyond the flash PMIs, July Durable Goods (Friday) is an important report, because it will give us greater insight into the state of “hard” economic data. If Durable Goods shows an uptick in corporate spending/investment, that might put upward pressure on expected Q3 GDP, which would be equity positive.

Bottom line, this week’s economic events should give more insight into the pace of the economy, but barring any big surprises, it’s likely the calm before the “storm” of next week.