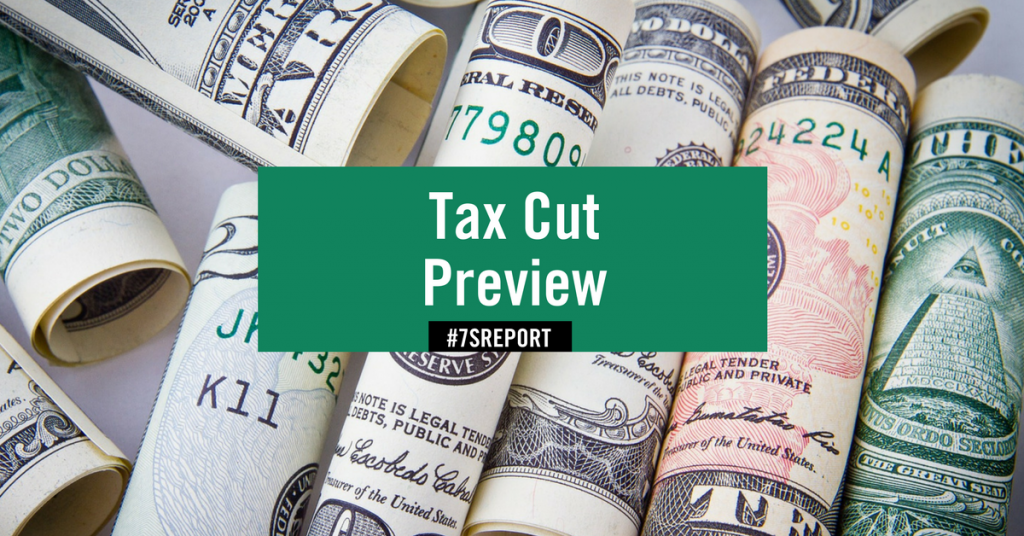 Today we should see the next  step in the tax cut drama, as Republicans unveil a more detailed tax cut plan. But while some of the headlines around this are sure to seem “pro-growth” and positive, it’s important to realize that almost nothing announced today will actually make it into any legislation (and it doesn’t remove the chances nothing gets done at all).

Still, tax cuts are the most credible and legitimate “bullish” or “bearish” wildcard remaining for the markers in 2017.

From a bearish standpoint, while tax cuts aren’t fully priced into stocks, there is the expectation something does get done, especially regarding foreign profit repatriation. If tax cuts, like healthcare, fail, then we’re now sitting with a market at 18X next year’s earnings—and no identifiable future growth catalyst (and a Fed raising rates). That will cause investors to reduce exposure.

Again, little (if any) of this will make into final legislation.

But, it’s the starting point for negotiations to a potential deal.

Bigger picture, the expectations for tax cuts (what makes them bullish of bearish) won’t change regardless of today’s details.

To review, from a corporate rate standpoint…

Likely market reaction: (Withheld for subscribers only—unlock specifics and ETFs by signing up for a free two-week trial).

Wildcard to Watch: I was actually surprised and encouraged to see that a “pass through” rate cut is in this proposal. This is very important to small businesses (like mine). Approximately 95% of American businesses are “pass through” (LLCs, S Corps, etc.) where the business owner is taxed at the individual rate. So, in many ways that makes corporate tax cuts just important for large corporations and shareholders.

A cut to the pass through rate lowers taxes for small business, and that could be a potentially significant (and unexpected) positive for the economy, if any of this actually gets passed into law (and that remains very much in doubt).

Bottom line, don’t let positive (or negative) headlines fool you today. The tax cut fight has only just begun, but how it works out will have potentially significant consequences for the economy. We will remain on top of it for you throughout the process. 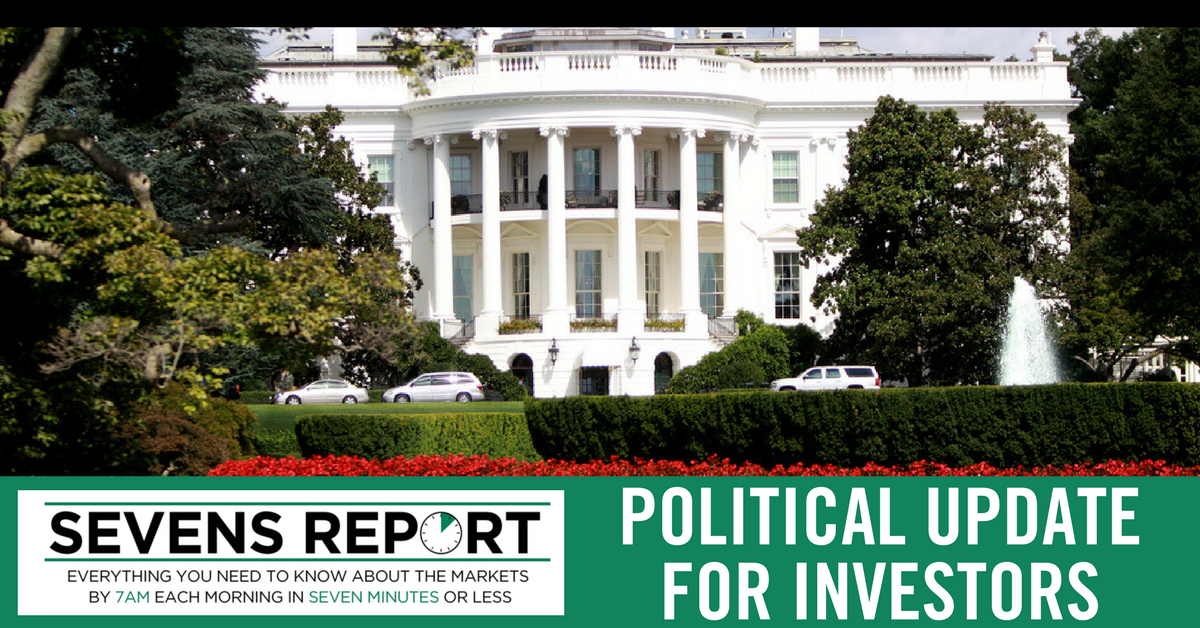 Trading yesterday was driven by multiple political-related headlines. Politics reasserted itself on the market narrative on Wednesday, helping stocks initially rally following renewed hopes for an Obamacare repeal/replace bill, and after the Trump Administration unveiled a significant (though expected) tax cut plan.

Yet despite the media focus on those two events, any actual progress with healthcare or taxes remains unlikely (and didn’t get better yesterday). The third piece of political news, an investigation into aluminum imports by the Commerce Department, was the most important (yet underfollowed) political development for markets yesterday.

I cover each issue below, cut through the noise, and get to any likely market influence. The bottom line is that despite generally favorable headlines, all the political news yesterday was a mild net negative for stocks.

Why It Matters: Corporate tax cuts remain the easiest catalyst for a stock breakout, but unfortunately the tax plan revealed yesterday is very unlikely to pass Congress, and the reason is simple: There is no offset to the reduced revenue from lower taxes. As such, this plan will increase the deficit, and that likely means Democrats can filibuster the bill. Going forward, unless a tax plan contains some material offsets to reduced taxes (like border adjustments) then passage of any big tax cuts remains unlikely in 2017, and that’s stock negative.

How Markets Reacted: Tax-related headlines can still cause a pop in markets, but only a credible plan that can pass Congress will be a bullish gamechanger. (For more market insights in your inbox by 7am each morning, sign up for a free 2-week trial at 7sReport.com.)

What Happened: The details were fast and furious on this yesterday, but as of this writing it appears the House will vote on the bill potentially this weekend, and odds of passing are decent.

Why It Matters: Passage of an Obamacare repeal/replace increases the chances of tax cuts also passing, as it will increase Trump’s political capital and provide more revenue to offset tax cuts. However, even if this bill passes the House, the chances of passage in the Senate in the current form remain slim. So, while a potential moral victory, it won’t significantly increase the chance of healthcare reform, and as such I don’t see it as a bearish gamechanger for healthcare ETFs (XLV, IHF, IBB).

How Markets Reacted: Stocks (including health care names) largely ignored this news, as again the likelihood of any Obamacare repeal/replace becoming law remains slim. (For more market insights in your inbox by 7am each morning, sign up for a free 2-week trial at 7sReport.com.)

What Happened: Yesterday the Commerce Department announced an investigation into aluminum imports. No tariffs were announced, but it certainly looks to be moving in that direction. This announcement comes one day after Commerce levied taxes on Canadian soft lumber imports. Additionally, a Politico story hit midmorning that President Trump was close to signing a document notifying Mexico and Canada that the US intends to withdraw from NAFTA within six months. The document does not guarantee a US exit (they can change course), but it is a necessary legal step to begin the process. Since yesterday the White House has said it’s not preparing this document yet but didn’t squash the idea all together.

Why It Matters: These trade events yesterday (and this week) are actually the most important political events of the week, not because of their immediate impact (Canadian lumber and aluminum tariffs don’t mean a trade war, and the NAFTA announcement is likely for negotiating leverage), but it does remind markets of Trump’s potentially disruptive trade policies. That matters, because right now markets have not priced in any trade-related headwinds, so this does represent at least a modest risk to the bullish narrative.

How Markets Reacted: All the trade headlines weighed slightly on stocks during the late afternoon, but the current headlines simply aren’t bad enough to warrant an outright reversal in stocks. (For more market insights in your inbox by 7am each morning, sign up for a free 2-week trial at 7sReport.com.)

Bottom Line on the Political Update for Investors:

Material “gaps” remain that must be filled if the S&P 500 can sustain a meaningful breakout above 2400, including 1) The gap between political expectations and political reality, 2) The gap between too-low Treasury yields and very high stock prices (although that’s narrowed some-what this week, but not enough), and 3) The gap between soft economic surveys and hard economic data.

In the very short term, investor sentiment seems skeptical, and the market acts as though investors are more afraid of missing a breakout than they are a break down (similar to what we saw when the S&P 500 broke through 2300). So, the “pain trade” looks higher short term and that’s helping stocks.

But given valuations (the S&P 500 trading nearly 18X 2018 earnings), I don’t think sentiment alone is enough to push us decidedly through 2400 without positive resolution on some of these gaps. That means we need 1) Actual progress on tax cuts (which didn’t happen yesterday), 2) A rally in the 10 year above 2.40%, or 3) Better economic data starting today.

I am therefore sticking with my call that the 2300-2400 broad trading range in the S&P 500 should hold, and I would not be chasing stocks at these levels.

Cut through the noise and understand what’s truly driving markets, as this new political and economic reality evolves. The Sevens Report is the daily market cheat sheet our subscribers use to keep up on markets, seize opportunities, avoid risks and get more assets.