The Fed made no changes to interest rates this week, as expected.

The Fed statement almost perfectly met our “Meets Expectations If” scenario, as the Fed acknowledged the slight loss of economic momentum since March, but stated it viewed the slowing as only temporary, and left the door firmly open for a rate hike in June.

Looking specifically at the statement, the Fed said yesterday that economic activity had “slowed” compared to “expanded at a moderate pace” in March. But, in the second paragraph, the Fed said the loss of economic momentum appears to be “transitory,” and signaled the recent underwhelming data won’t make the Fed deviate from future rate hikes.

Underscoring that point was the fact that the Fed said risks to the near-term economic outlook continue to be “roughly balanced,” which is Fed speak for “we can hike rates at any meeting going forward.” Bottom line, the Fed was not spooked by the recent soft data and it is not deterring them from any future rate hikes… yet.

From a market standpoint, there was a mild “hawkish” reaction, not so much because the statement was hawkish, but instead because there was nothing dovish in the statement. That’s what markets have become conditioned to expect. The Dollar Index drifted to the highs of the day 30 minutes after the statement while the 30-year Treasury erased small gains and closed fractionally lower. Stocks drifted slightly lower, but selling was mild. Overall, the Fed statement was not a market mover.

The Sevens Report is the daily market cheat sheet our subscribers use to keep up on markets, seize opportunities, avoid risks and get more assets. Try it free for two weeks.

Get the simple talking points you need to strengthen your client relationships with a free two-week trial of The Sevens Report.

There is virtually no chance the Fed will hike rates at tomorrow’s meeting, as the chances were slim before the recently disappointing economic data. Now, those chances have declined to near zero. The key question tomorrow is: Just how forcefully will the Fed telegraph the next rate hike?

The answer to that question, taken in the important context of the recent slowing of economic momentum, will decide whether the FOMC decision pushes stocks higher, or whether we see a retracement of the recent gains. 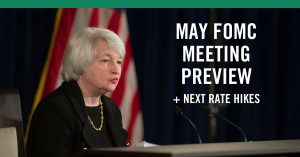 Hawkish If: The Fed clearly signals a rate hike is coming in June. Right now, Fed fund futures are pricing in about a 70% chance the Fed does hike rates, but that’s not a consensus expectation, yet. If the Fed specifically points to the “next” meeting in tomorrow’s statement (as it did in the fall of 2015 and 2016) as the likely date of the next rate increase, you will see markets react hawkishly as a June rate hike is not a foregone conclusion. Additionally, if the Fed is still intent on hiking rates in June despite recent economic data disappointments, that might imply a Fed that is more hawkish than previously expected.

Meets Expectations If: The Fed slightly downgrades the assessment of the economy in paragraphs one and two, but also says any slowing of activity is likely only temporary (it’s the temporary part that is the key). Markets expect the Fed to acknowledge the modest loss of economic momentum, but not to make too big a deal out of it.

Dovish If: The Fed materially downgrades economic commentary in paragraph one and downgrades the outlook on inflation, and in doing so materially reduces the chances for a June rate hike. Specifically, to be dovish we would need to see 1) A downgrade of both the growth and inflation language in paragraph one, plus no mention of it being temporary. The net effect would be to remove the expectation for a June rate hike.

Fed Balance Sheet. As we have covered, the reduction of the Fed’s balance sheet is an important but under reported topic that could result in a more-hawkish-than-anticipated Fed. Specifically, the major questions facing the Fed regarding the balance sheet are:

2) What securities will the Fed stop buying (just Treasuries or Mortgage Backed Securities, too)?

3) How will the Fed stop reinvesting proceeds (all at once, or gradually)?

How these questions are answered will determine whether the Fed balance sheet is a hawkish influence on markets (yields up, stocks potentially down).

I (and almost everyone else) do not expect the Fed to touch on this in this week’s meeting. However, if the Fed does address this topic, it will come in paragraph five of the statement. Any change there will likely have hawkish implications on markets tomorrow, but again any changes are unlikely.

Every Monday in the Sevens Report, you’ll find a review of last week and a preview of this week. Sign up for your free trial today and start each week “sevens strong.” 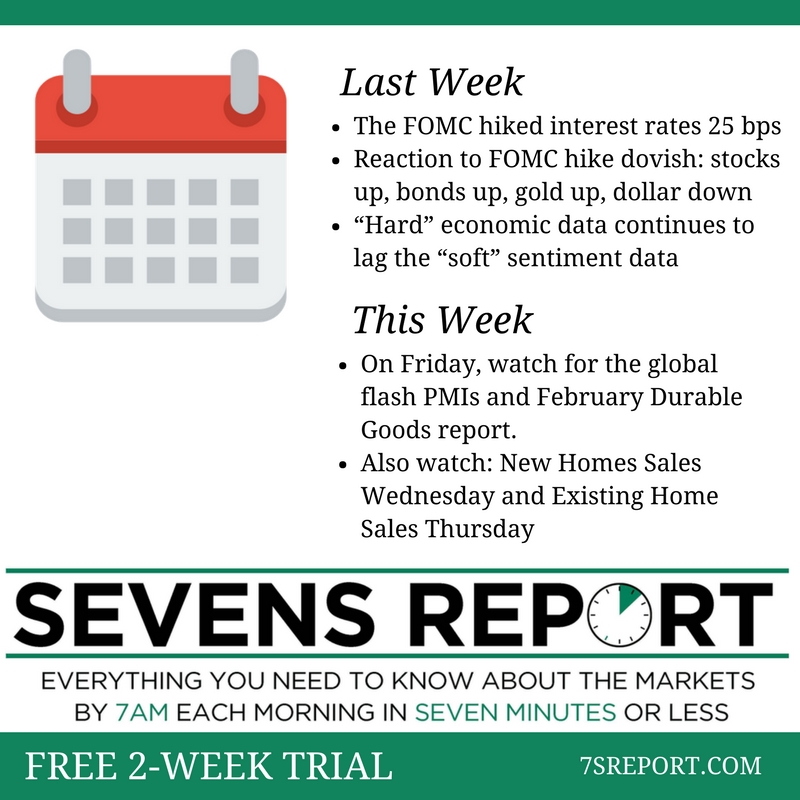 Last week was generally “Goldilocks” from an economic data and Fed standpoint, as economic data continued to be buoyant while the Fed successfully executed a dovish hike (at least in the short term).

Starting with the Fed, the FOMC hiked interest rates 25 bps, as expected, but left the dot projections for 2017 and 2018 unchanged at three hikes each. Given market expectations for an increase in the dots, the reaction was immediately dovish (stocks up, bonds up, gold up, dollar down).

As we said last week, it’s important to see the forest for the trees. Regardless of the Fed’s projections, the first hike of 2017 came three months earlier than expected, and the question going forward isn’t whether the Fed hikes again, but “when” and “how often.”

If inflation data keeps rising and economic activity accelerates (or we actually get corporate tax cuts) the answers to those rate hike questions will be “soon,” and “more than three times.” Point being, don’t confuse the short-term dovish reaction with a reduction in risk from a hawkish Fed throughout 2017. The risk hasn’t changed.

Looking at the economic data last week, it showed an ongoing “reflation trade,” as inflation and growth data beat estimates. Both February PPI and CPI ran a touch “hot,” and showed either bigger-than-expected monthly increases (PPI) or year-over-year price increases that were the biggest in several years (headline CPI rising by 2.7%).

Meanwhile, the first economic data points from March, Empire Manufacturing and Philly Fed, also both beat expectations. Philly was 32.8 vs. (E) 30.0 and New Orders, the leading indicator of the report, rose to 38.6, which is the highest since 1983!

Actual “hard” economic data last week was a touch disappointing on the headline as Retail Sales met expectations and the “Control” group (the best measure of discretionary consumer spending) rose just 0.1% vs. (E) 0.3%. Revisions to the January data were positive and offset the disappointment, though (January control retail sales were revised to 0.8% from 0.4%).

Bottom line, the “hard” economic data continues to lag the “soft” sentiment data (i.e. Philly/Empire Surveys) and the running estimate for Q1 GDP (the Atlanta Fed’s GDP Now) is just 0.9%, the lowest in nearly a year.

Again, it’s not an indictment of the rally just yet, but at some point, that GDP number needs to start to rise to meet the surging survey data, otherwise we’ve got a problem.

This Week: Economically speaking this will be a generally quiet week, as the notable data doesn’t come until Friday via the global flash PMIs and February Durable Goods report.

Yet despite the small number of reports, the data is still important, because it has got to continue to help support stocks in the face of ever-dimming policy prospects. So, those numbers (especially durable goods) need to continue to imply economic acceleration.

Other data to watch this week includes housing data (New Homes Sales Wednesday and Existing Home Sales Thursday), but generally housing continues to hold up well in the face of generally higher rates.

The Sevens Report is everything you need to know about the market, in your inbox by 7am each morning, in 7 minutes or less. Get a free trial!

Get the simple talking points you need to impress clients and prospects from the Sevens Report. Here is an excerpt from today’s full report.

If A Rate Hike Is Expected, Why Aren’t Rates and the Dollar Higher? 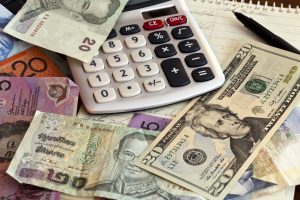 If a rate hike is expected, why isn’t the dollar index higher?

Yet despite that relatively quick shift, as mentioned the Dollar Index still isn’t materially above 102, and still not close to the recent 103 high. Meanwhile, the 10-year yield is still decently below 2.60%.

The reasons we haven’t seen greater rallies in the dollar or yields are twofold.

First, a rate hike is not a foregone conclusion because of the jobs report next Friday. If it’s disappointing then a May hike makes more sense.

Second, the market still doesn’t believe the Fed is materially more hawkish. So, even if the Fed hikes now, the market still expects just three hikes the remainder of the year, which is what the Fed said in December.

The point is, the currency and bond markets still haven’t fully priced in a March hike yet, nor have they accepted the existence of a “hawkish.” Fed. However, if that jobs number is strong I believe we’ll see further upside in the dollar and yields.

But the big jumps in both will come when the market realizes the Fed is more hawkish than it currently expects, and that likely won’t happen until we see more inflation or proof of actual fiscal stimulus.

Regardless, barring an economic set back the trend higher in the dollar and rates is close to resuming, and investors should be positioned accordingly.

Cut through the noise and understand what’s truly driving markets, as this new political and economic reality evolves. Get your free two-week trial of the Sevens Report today.