An excerpt from today’s Sevens Report.

Stronger economic data remains an unsung hero of this post-election rally, and while Trump gets the headlines, it’s really the economic data that’s enabling this rally as better economic growth is allowing the market to continue to give Trump and the Republicans the benefit of the doubt.

I can go through the litany of reports, but whether it’s PMIs, the Jobs Report, or Business Investment, the data has been accelerating since mid to late 2016, and that’s created the proverbial “rising tide” that’s helped under-write both policy optimism and the rally in stocks.

But, while hope may be growing that there will be less drama from the administration (the reason for Monday’s rally), at the same time there’s growing evidence that actual policy reality will not meet market expectations.

So, in the near term, it’s going to be up to economic data to continue to provide a reason for markets to give Washington the benefit of the doubt, otherwise the sober reality of a market that now trades well over 18X current-year earnings will begin to cause problems.

Bottom line, if economic growth slows in the near term, that will cause a pullback in stocks. So, in today’s Sevens Report for subscribers, I go into detail on: 1) How likely is an economic slow down? 2) What are the leading indicators to watch? and, 3) How do we position if it happens?

A probability that high may surprise people, but I have several reasons for it: First, we’ve seen an acceleration in economic activity, but we still haven’t really achieved the “breakout” pace of consistent 3% GDP growth that tends to feed on itself and further stimulate the economy. For all the excitement, we’re still in a 2%ish GDP regime (GDP Now from the Atlanta Fed has Q1 GDP at 2.7% in Q1). Point being, things down have to slow very much before the economy is right back in neutral.

Second, the consumer has powered this economic acceleration, but the consumer is tired. Credit creation is slowing, and retail sales reports have been lackluster of late. To boot, the job market remains basically at full employment and while wages are rising, they aren’t rising fast enough to power incremental acceleration consumer spending. Unless we see proof consumers are accessing the equity in their homes, I don’t see what will cause consumer spending to grind higher.

The Citi Economic Surprise Index rose steadily through Q4 of 2016 as economic data consistently beat expectations. Going forward, this index is now an important leading indicator for the market, as any material move back down towards zero will create a headwind on stocks.

Third, business investment has accelerated lately and that is good, but the uncertainty over the tax code changes (and trade in general) has the potential to be-come a headwind on business investment. Here’s my point: The tax changes being discussed in Congress could eliminate interest deductibility and change a host of other tax issues. If I’m a business and I’m thinking of getting a big loan to finance expansion, I’m likely going to wait until there’s more clarity on these and trade issues be-fore taking on too much risk.

Finally, leading indicator of growth for the global economy, China, is actively trying to slow its economy. China’s credit-fueled expansion back in February 2016 marked an inflection point in the global economy and things have been better since. But with a year of stimulus be-hind it, currency issues, and once again overheating property and asset markets, Chinese authorities are trying to cool their economy. The effects aren’t immediate or direct on the US economy, but the fact is that a slow-ing Chinese economy will become a headwind on the US at some point (how much of a headwind depends on how well the cooling is managed).

“Leading Indicators” and, “How do we position if it happens?” sections are restricted to subscribers.

Take advantage of the limited time special offer—if you subscribe to the Sevens Report today, and after the first two weeks you are not completely satisfied, we will refund your first quarterly payment, in full, no questions asked. 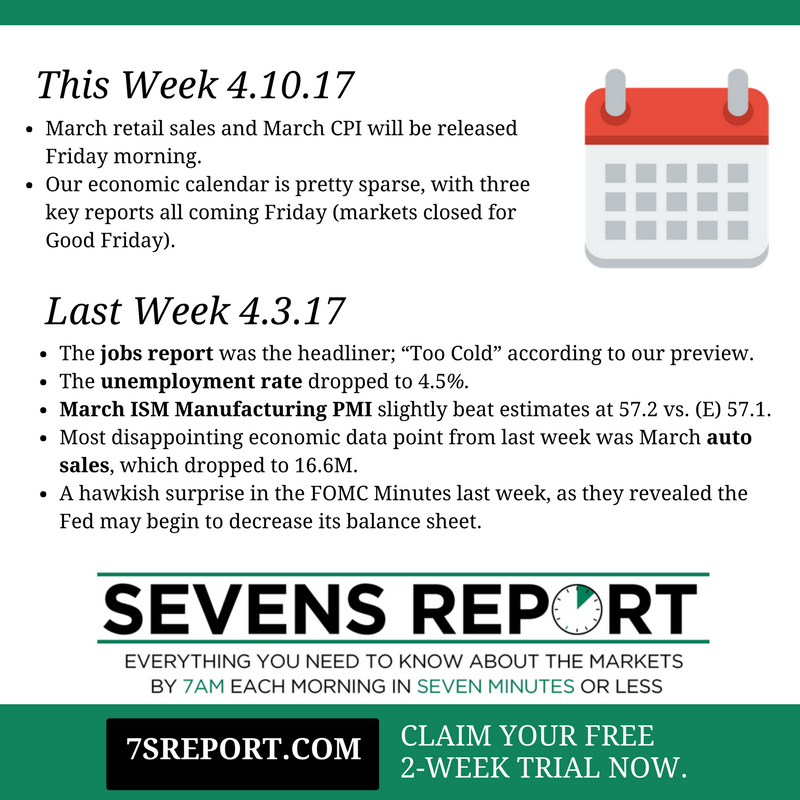 Did One Fund Cause The Rally?

Why the Falling Yuan is Causing a Selloff