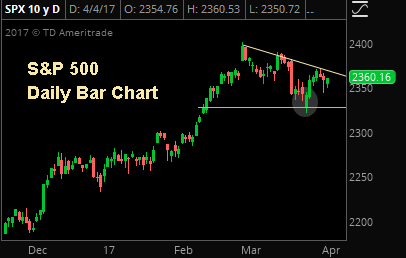 The S&P 500 is currently in a consolidation pattern with key support lying at 2328 while downtrend resistance has moved down to 2367 today.

The S&P 500 has been consolidating the late February/early March sprint to new highs for 5 weeks now. And while the long term trend remains higher, there are a few technical levels worth watching in the near term (see chart for visual on initial levels).