With the exception of the ECB, it was more of the same last week as economic data from the U.S., the EU and China confirmed what the market currently assumes and has priced in.  Those assumptions are that:   U.S. growth is recovering from the temporary winter drop, and 3% annual GDP growth is consensus. The EU economy is seeing the recovery accelerate slowly (but overall economic growth remains weak). Economic growth in China is showing signs of stabilizing (so 7.0%-7.5% GDP growth is still to be expected).

Looking at last week’s data, reports were light in the U.S., but as mentioned, the reports we did get were good.

ISM non-manufacturing PMI was 55.2, the best reading since August, and that strong data helped reverse a big decline (over 100 points) last Monday in the Dow.

Additionally, weekly jobless claims declined to 319K, and appear to have resumed the downtrend we were seeing prior to the Easter/Spring Break “noise” in the number.  And, if that trend of lower claims continues, it’ll continue to imply we’re seeing incremental improvement in the labor market (obviously a positive for the economy).

The Yellen testimony in front of Congress was in focus last week. But while some in the media were trying to spin her comments as a slight downgrade on the outlook for the economy, they really weren’t. Her comments didn’t give anyone any reason to change their outlook for Fed policy (tapering ending October/December, with the first interest rate hike coming in mid-2015).

In China, composite PMIs were in-line (importantly the service sector PMI stayed above 50 at 51.4). Meanwhile, the April trade balance was the positive surprise of the week, as both exports and imports increased small vs. expectations of a 3% monthly drop for both.

We get more Chinese data this week, but if it can confirm what we saw last week, it would make a very good case that the Chinese economic growth pace is stabilizing. (This is important because we may be able to get long “China” and also because it’ll remove the macro risk of a Chinese “hard landing.”)

The “biggest” event of the week was the ECB meeting last Thursday.  As expected, there was no change to policy, but ECB President Mario Draghi’s comments during the Q-and-A (he stated that the Committee was “comfortable acting next time”) commanded the market’s attention.

We knew Draghi would again try to rhetorically ease policy, but no one expected this amount of specificity.  And, it worked. The euro collapsed late last week, and everyone is penciling in either a rate cut in June, or the introduction of negative deposit rates. (QE, however, remains well off in the future.) 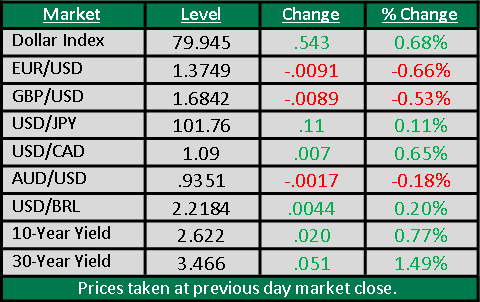 This is a busy week of data on the calendar, but I don’t expect any of it to materially change the market’s economic assumptions about the U.S., EU or China, unless the numbers are simply horrid.

In the U.S., retail sales tomorrow are the highlight, followed by industrial production Thursday. Although economic data have been strong, the inexplicable strength in the bond market and U.S. dollar weakness are keeping concerns alive about growth going forward.  So, to a point, the market has a confidence problem, and each number that comes in better than expected (especially in April) helps to re-affirm that the economy is indeed seeing the recovery accelerate.  So, retail sales and IP are important from a confidence standpoint.

We also get the first look at economic activity in May, via the Empire State and Philly Fed reports (both Thursday).  These two first looks have lost some significance now that flash PMIs are released for the U.S. (they come next Thursday), but still they are watched because it’s the first data for the current month.  Philly has been the better predictor of national manufacturing activity lately, so pay more attention to that one.

Internationally, China releases April retail sales and industrial production tonight, and again the market is looking for further signs of stabilization.  In Europe there are several pieces of data, but again unless the news is horrid, it won’t really change anything as the entire focus of Europe is on what the ECB will do at the June meeting.