The political noise and theatre has officially reached a new level, with Russia, pardons, impeachment and other such terms of significant connotation being bandied about in the media seemingly every day. And if we were just reading the media headlines, it would cause someone to go into serious risk-off mode in their portfolio, especially given the tenor of the major news outlets.

But as we and others have been saying all year long, the market has so far successfully insulated itself from all the political drama, as it doesn’t have anything to do with earnings or (as of yet) the economy.

We’ve been consistent in our coverage of the political landscape, and I feel that we’ve done a good job cutting through the distracting noise. Yet given the recent uptick in political fervor across the media (including financial media), I think it’s helpful to identify, clearly, what political events could actually cause a pullback in stocks.

Absent one of four events happening (as it stands right now), politics will remain a distraction, but not a bearish influence. To be clear, we do not think any of these events are likely at this time; however, we are watching for any hints they might become more probable and cause us to reduce risk and equity exposure. 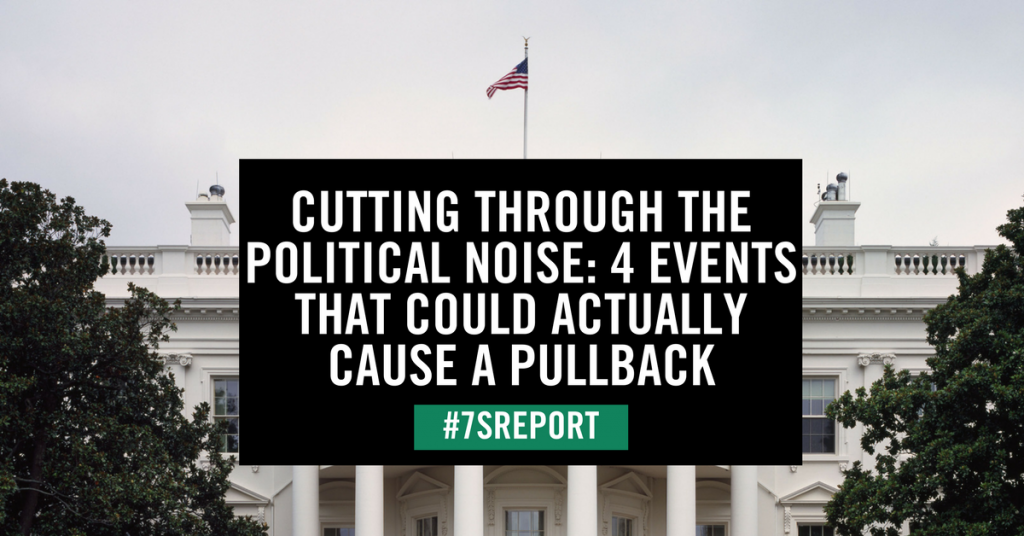 Political Pullback Event #1: Trump Fires Mueller. There are rumors and speculation swirling that President Trump will fire Robert Mueller, the special counsel in charge of the Russian election tampering investigation. So far, he is not expected to fire him, but Trump is unpredictable. If Trump were to do it, that would cause a risk-off move in markets, as everyone would take it as a tacit admission of some guilt on Trump’s part (i.e. fire the investigator before he finds something). But even if Trump wanted to fire Mueller, he actually can’t. Only the acting Attorney General can fire Mueller.

Given that history (rightly or not) people and markets would take the firing as a de facto admission of guilt that the president did something wrong, even it it’s not true. To boot, Congress would likely reappoint Mueller to the same job immediately, resulting in a massive stand off between the executive and legislative branches of the federal government. Nothing here would be positive for stocks, and a “sell first, ask questions later” mood could sweep across the markets.

Political Pullback Event #2: Steel Tariffs. The idea that the Commerce Department could impose sweeping steel tariffs (likely aimed at China) is a potential negative for markets, because it could ignite a trade war, which would be bad for US and global economic growth. Whether steel tariffs would result in retaliation from China or other nations remains to be seen, but the fact is
that macro-economic risks would rise, and once again we’d have a “sell first” reaction from stocks.

Political Pullback Event #3: Government Shutdown. We’ve covered this consistently in the report, but the current budget for the operation of the government ends on Sept. 30. Now, the probability of a shutdown remains low because the Republicans control the government. So, they’d literally shut down the government as the majority party a year ahead of elections, a move so politically stupid that it’s almost inconceivable.

However, this is Washington, and right now the budget being advanced through the House contains $1.6 billion in funding for the Mexican border wall, and a lot of cuts to domestic program. So, we can expect united Democratic opposition and (importantly) some moderate Republicans (Collins, McCain) to potentially oppose the budget, which makes passage in the Senate uncertain.

Political Pullback Event #4: Debt Ceiling. Again, this is an event we’ve already touched on in previous issues, but we’re getting a lot closer to the mid-October deadline and there’s been no progress made. Like the government shutdown, political common sense implies this won’t be a problem given it’s politically disastrous for Republicans. Congress has until mid-October to extend the debt ceiling, or face another default drama.