What Does the Commodity Meltdown Mean?

The declines in gold and silver yesterday were astonishing.  In 10+ years of watching both metals trade every day, I’ve never seen that type of decline.  In addition to gold and silver collapsing again, every single commodity on my screen was lower, with the exception of orange juice.

This commodity rout is important as it’s the biggest thing occurring in any market right now.  I touched on it some yesterday, but I want to review it more in depth today to make sure everyone knows what’s happening and what it means.  I believe what’s happening in the commodity space presents a binary outcome for all asset classes, and I want to make sure everyone knows the two ways this is going to work out.

Theory  No. 1—The Return of the “Real” Economy.

The first theory is a bullish one:  The reasoning goes that gold and silver are declining because we are on the cusp of another period of real economic growth and technological advancement that will see equities rally substantially as the real economy finally kicks into gear after years of stagnation.  That expectation is causing a rotation out of inflation and crisis-linked commodities like gold, and into more economically sensitive assets like stocks, which will benefit from the new momentum in the economy.

This theory is certainly possible, but there are a few problems:  First, if we are on the cusp of a period of economic advancement, then why are all commodities getting killed, including economically sensitive commodities like oil, copper, steel, gasoline, palladium and others?  The answer to that question seems to be increased supply—and that increased supply is causing wholesale rotation out of commodities and into stocks.  That is a fair argument and very well may be true.

But, there is one other chink in the armor of Theory No. 1.  If we are on the cusp of a new period of economic expansion, then why aren’t bonds falling?  Bonds have been rising since March, and if we’re about to see the real economy kick into gear for the first time in 4+ years, bonds should be falling like a stone—but they aren’t.  One possible explanation is that money flows from Europe and Japan are holding bonds up, but I haven’t seen enough evidence to tell me that’s the case.

What do we do if this theory is true:  You buy U.S. stocks with both hands, and sell any commodity exposure and reduce bond holdings.

How will we know if this is the right theory:  You’ll know because 1) bonds will crack, 2) economic data will accelerate, and 3) corporate profits and outlooks will get better (none of which is happening now).

Theory No. 2:  The Deflation Theory

The second theory is a deflation theory.  With gold and silver imploding and industrial commodities (in fact all commodities) declining rapidly, and U.S. Treasurys and German Bunds rallying throughout March, markets are telling us the global economy is very close to entering a period of deflation.  Europe is dangerously close (if not already in) deflation, Japan is still in deflation, and Chinese and U.S. economic growth is slowing.

The “deflation trade” is occurring in commodities (especially gold and silver) first as money flows out of commodities its flowing into bonds.

This theory also makes sense, except for one thing—the equity market is still rising.  Stocks are rallying in the face of a commodity collapse and higher bond prices, and that shouldn’t happen in a deflationary environment.

One possible answer to why this is happening is money flows.  Investors are continuing to buy into stocks because they “have to” because of the Fed, which is propping up the stock market despite significantly deteriorating fundamentals.

How will we know if this theory is true:  You’ll know because the equity market will break from its highs and bonds will continue to rally to new highs.

I want it to be Theory No. 1, but my gut is afraid it’s Theory No. 2.  Not to sound like a loon, but the last time I saw commodity carnage like this was in July/August of 2008.  I’m not saying there is going to be another financial crisis (I don’t think there will be) but I’m just pointing it out.

Finally, a lot of markets simply aren’t making sense right now—if we’re in a new golden age of economic expansion why aren’t bonds falling?  If we’re in deflation, why aren’t stocks falling? How the hell have bonds and stocks been rising together for the last seven weeks?   When things don’t make sense like this, I’ve never seen it end with a melt-up in the market.  I hope that this time I’m wrong.

One more thing—if Theory No. 2 is the correct one, I think this ultimately ends with more Fed easing, which will be good for gold, which means that at some point there will be a buying opportunity (I don’t think it’s now, too much technical damage has been done and the commodity needs to settle a bit). 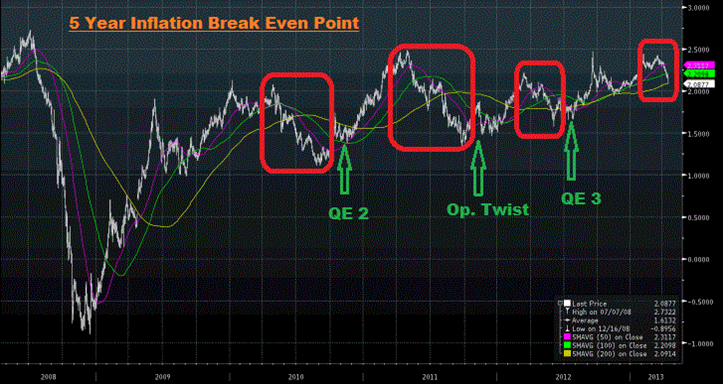 The chart above shows the five-year inflation expectations of the market.  As you can see, they’ve declined sharply over the past several weeks.  I’ve highlighted previous times the inflation expectations have seen a significant decline, and each time its been met with more Fed easing.  If the declines in inflation expectations continue, that means deflation, and the Fed will ease more in the coming months, not tighten.  This remains an important indicator to watch.

Download a Sample Issue of Sevens Report. Click Here
Transports and Russell 2000 — Indices to Watch Today This Is the Leading Indicator for All Markets
Scroll to top